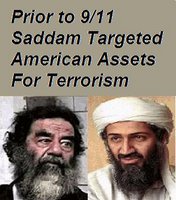 Proof of the links between Saddam Hussein’s Iraq and Osama Bin Laden’s Al-Qaida, grows stronger with each translation of the highly classified Iraqi documents captured during Operation Iraqi Freedom. The captured documents in question, are being released to the public by the Foreign Military Studies Office Joint Reserve Intelligence Center, found here.

According to this top secret memo by an Iraqi Air Force Brigadier General dated March 17, 2001, the targets for their intended operation are spelled out. Thanks to the Captains Quarters for posting three translations, the first is by Joseph Shahda:

This document clearly exposes the Pentagon’s assertion that, “Saddam’s Iraq had ended all interest in international terrorism”, to have been utterly false. Especially when taking into consideration Saddam’s widely publicized funding ($25 000 per terrorist)of Palestinian suicide terrorism against the Israelis.

Even more damning is the fact that the secret letter was issued by an Iraqi Air Force General, way in advance of the events that unfolded on 9/11. Ed Morrissey has more on this here. KGS

“The Pentagon has obviously been sitting on a treasure trove of paper incriminations against Saddam’s regime. So far, just a minuscule amount of the more than 3,000 hours of tape recordings of Saddam and 48,000 boxes of intelligence documents has been translated and deciphered.
What has come out so far has confirmed Americans’ worst fears about Saddam’s evil regime. To review:
Saddam is heard on a 1997 tape predicting terrorism would soon be coming to the U.S., while his son-in-law — who was in charge of Saddam’s weapons of mass destruction — gloats about lying to U.N. weapons inspectors to hide the extent of Iraq’s WMD program.
Saddam, in a tape made in 2000, talks with Iraqi scientists about his plans to build a nuclear device. He discusses Iraq’s plasma separation program — an advanced uranium-enrichment technique completely missed by U.N. inspectors.
An Iraqi intelligence document, released just two weeks ago, describes a February 1995 meeting between Saddam’s spies and Osama bin Laden. During that meeting, bin Laden offered to conduct “joint operations” with Iraq. Saddam subsequently ordered his aides to “develop the relationship” with the al-Qaida leader.
A fax, sent on June 6, 2001, shows conclusively that Saddam’s government provided financial aid to Abu Sayyaf guerrillas in the Philippines. Abu Sayyaf is an al-Qaida offshoot co-founded by bin Laden’s brother-in-law.
These are just a few of the revelations about Saddam and terrorism to be found in a handful of documents and tapes. When all are fully translated, we’re betting the terror links will be clear, damning and irrefutable.”