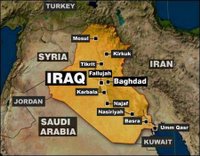 The Five Westerners held captive by Sunni terrorists were recently freed. While I’ll be extremely relieved if this ends well, I must admit to having mixed feelings about the CPT, concerning the activities attiributed to their group, such as passing out anti-American propoganda to Iraqis prior to the war, helping to fuel the hatred towards our troops, as well as helping out their brother ISM ‘peace activists’ screw with Israeli gaurds at check points, when they have better things to do.

I can’t overlook the stupidity that put them there in the first place. These people are there to help frustrate our troops efforts and I just can’t muster up the same emotion as for the ‘field gutted’ British aid worker Margaret Hassen. As a friend recently told me;

“I continue to be outraged by the actions of Arab terrorists who kidnapped these people.

I am outraged by the “peace activists” who have expressed no concern for the welfare of the hostages or indignation toward the terrorists.

I am further outraged by the CPT which blamed America for the kidnapping and then failed (as far as news stories account) to demand or even request the safe return of their workers.

I no longer feel quite alone in my outrage. Apparently Daniel Pipes picked up on this today:

This whole affair is demonstrating conclusively that the “peace activists” who emphasize their criticism toward one side of a conflict, are self-destructive and insane.”